This should have happened a LONG time ago. But I'm a flakey flake, etc, etc. You know the drill. Anyway, it still seems like cause for celebration. Although I wasn't really sure how to commemorate such an event, I thought maybe it would be appropriate to do a pseudo retrospective. I must warn you thoughm this blog may be a little self fellating because I'm feeling kinda nostalgic right now. Like one of those crappy sitcoms that makes a veritable highlights reel from old episodes as filler for the writers having the week off or something.

Although 100 blogs isn't that much especially since it's been over the course of almost 3 years, I really had no idea where I was going with all this. I've always been on again, off again reviewing. I started when I was 18 years old. EIGHTEEN. That's 8 years ago btw.  Seems like an eternity. I think it's actually the only thing I've ever even remotely done consistently for that long. I was super into Troma and gore and didn't have much to add on the subject of film as a serious concept, but I always liked talking about movies and the few people who actually enjoyed my reviews seemed to like that about them. They're not really critiques just stream of conscious bullshit. I did a few on Deadjournal, remember that? I don't think it exists anymore. Then I moved over the Myspace where I had a separate account just for movie reviews. I even reposted my early ones from Deadjournal. For the record, my very first review was for Cemetery Man. Also for the record, it SUCKED. The review, not the movie. Not going to direct link it here but for those interested I will go ahead and post the myspace link.

I had a lot of fun on Myspace but it was an inevitability that it wouldn't last forever. Their blog format kind of sucked too. Once Facebook stepped into the limelight I knew I needed a separate home for reviews. Blogger had always been there. So many great informative pages, especially on movies. I wanted to be one of them.

My first review here was for the Man with the X-Ray Eyes . Still probably my favorite Corman movie. For a while I wasn't even sure if I wanted this to be a movie review blog or just a generic anything blog. Like when I wrote a whole blog about trying thousand year old eggs. Those were G.R.O.S.S. After I bought them I began giving this out as party favors whenever we had company. When I say "give out" I mean "force feed" in order to earn a shot of whatever liquor I had on hand.

My favorite blog of my own is a tie between Hanuman vs. 7 Ultramans and the Noble War. Both films by psycho Thai schlockmeister Sompote Sands. Of which I was turned onto by super blogger Die, Danger, Die, Die Kill! . That whole world of Thai wizardry struck me in a very profound way. I'd just never seen anything like it. Since then, it has inspired me to go on several Thai VCD shopping sprees. Adventures I've yet to even begin to explore here in this blog. That obsession took the backseat when I had to move and all my stuff was locked up in storage for close to a year. I must also give a shout out to my pal over at Raculfright 13's Blogo Trasho who's constantly impressing me with his amazing discoveries of the Mexican exploitation varieties.

Anyway, I have no idea where I was going with this! I just wanted to talk about how much I love this blog and even when I'm not writing much, I'm thinking about it constantly.

I'm also thinking about this constantly... 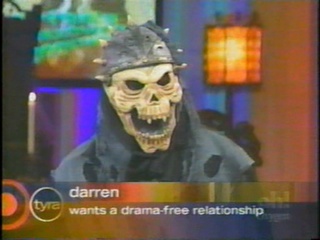 And just so you know I still have a few aces up my sleeve, here are some recent (and recently re-discovered) purchases you can look forward to in the future.... 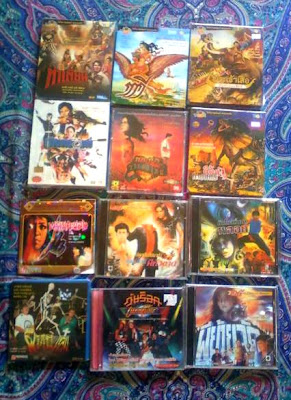 Once I can figure out the titles, ha!

I think we're done here.
Posted by Scumbalina at 4:40 PM