I've always considered myself relatively fearless when it came to food. I've had an interest in cultures outside of my own since I was a little kid. I feel a sense of mystique and wonderment when I see foreign text and Asian characters. This curiosity has taken me from through many phases, primarily always bringing me back to the Orient. Another factor in that is my feeble little hometown which has almost nothing going for it, does have a military base, and where there's a Military base, there LOTS of Asian people, where there are Asian people there are Asian markets. You'll find several hole-in-the-walls here and there in the dingy side of town, but there has always been only one that has me as a regular patron. The Ocean Oriental Market. It's small (though still substantially larger than the said 'holes-in-the-wall') but has had a faithful customer base for years and they really try to cater to all of your Oriental needs. Everything from a particular brand of pickled squid, a variety of spices and sauces from Mongolia to Indonesia and everything (ok, maybe not EVERYTHING) in between. A vast spectrum of Chinese vhs rentals to Vietnamese Cha Cha music. They've aided me when I was sick with holistic medicine and cheered up when I was down with their extensive sweet treats, I usually go for something basic like strawberry Yan Yan or fresh Lychee fruit if it's in season. I've also sustained myself during periods of extreme brokeness by defaulting to the traditional Asian ramen packs. I'm not talking about that shit from your local grocery store that's "chicken", "beef", or "shrimp" flavored. I'm talking about a veritable hodgepodge of rice, wheat or potato noodles coming in all different sizes and textures, with oils, sauce packs and dried vegetable. My favorite is this crab flavored phnompenh styled clear potato noodle soup with these pretty little pink swirly things in them, costing just mere cents more than the domestic crap! I realized today that I've been shopping there for 9 years, closing in on a decade really makes you think! I've made a lot of blind buys over the years, many of which have become apart of my regular consumption, but there have been MANY things that I would sooner commit myself to boring American food
Hell forever than try again. Which brings me to today's experiment... 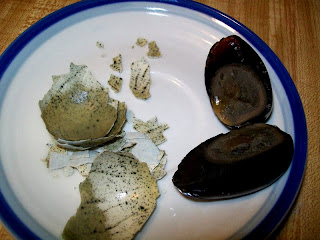 Ok, so they aren't REALLY a thousand years old, but after trying them you'll swear they are. Apparently it's a way of preserving duck eggs with clay and ash. Though I love duck, I'm no expert on duck eggs. So I'm not sure if they're black anyways or if that is the result of Centurifying them, but as you can see...they .. are .. BLACK! Well actually, they're black to the naked eye. If you hold it up to the light you can see that it's really more of a dark translucent brown. The yolk is a grayish green that just screams "DO NOT EAT!". Did that stop me? Of course not, I cut it in half and promptly put the gelatinous oval monolith mystery in my mouth. Talk about a rude awakening! I can usually choke something down, but that grey yolk was too much even for me. I HAD to spit it out! The best word I can find to describe it is simply "musk", then add the fact that it's an aborted duck fetus. GAMEY EGG MUSK. The texture was different from chicken yolk, smooth like bean paste. Associating it with a duck's body wasn't helping much either. I may be experimental with food but I draw the line at bodily functions, which I suppose technically an all eggs are, but not until I experienced this funky-funky doo-doo, did I think of it that way. But I couldn't waste it! I bought a pack of six and I was having hard time choking down the one. I de-yolked it then had a stroke of genius! Malt vinegar. I'm one of those people who will eat anything pickled and savors the tart goodness, sopping balsamic up with bread or whatever else will hold it. I went through a period where I was cutting up an hard boiled egg and dowsing it with malt vinegar as a snack. The yolk was a lost cause but the vinegar made the egg-blacks edible. Will I ever buy Century Eggs again? Hell No! But I can cross that off my list of Ocean Oriental Market Curiosities and now I have five new party favors for some unlucky guests who accept my next dinner invitation :-D 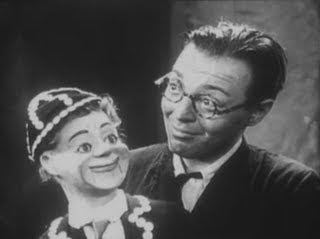 ps... as you can see, the shells are all cool and speckled so I think I shall incorporate
them into some kind of crafty endeavor
Posted by Scumbalina at 6:58 PM

Email ThisBlogThis!Share to TwitterShare to FacebookShare to Pinterest
Labels: Did somebody just fart in my mouth?, Meet Scumbalina..., Never Again...