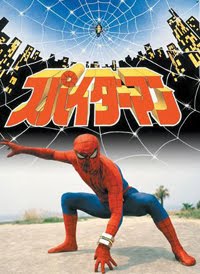 Chances are you've seen the intro to this kooky fun fest (if not scroll down and watch it NOW). It's pretty much gone viral because of it's obvious coolness. There's something about taking an iconic character and putting them in a foreign setting with foreign characters that makes it feel very so strange and off. Seeing this Supaidaman is almost as wonderfully weird as the Turkish false eyelash wearing rapist Spiderman in 3 Dev Adam.
Apparently for four years Marvel allowed Toei to do whatever the fuck they wanted with whatever character they wanted (?). I'm sure you can imagine that Toei did things with the character that Marvel never dreamed of like make it, um...AWESOME!? Truth be told I'm not really that kind of nerd. I've never gotten into the Marvel/DC/any-superhero-related-comic thing. I'm not sure if that makes me biased or unbiased. I love the idea of foreign reworkings, no matter how artfully (or poorly) done it is it always feels wrong. Sometimes Usually so wrong that it's right. And the Toei Spider-Man feels oh so right. 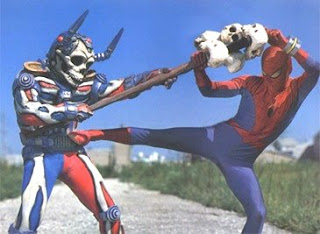 No Peter Parker here. Our hero is Takuya Yamashiro, motorcycle racer whose father is killed after a UFO lands. The ship is called "the Marveler" and the remaining survivor is from a planet called "Spider". The mysterious Alien gives Takuya a bracelet that gives him the power of the Spider! There are also some bad guys lead by "Professor Monster" (best villain name ever). Oh yeah, and a giant fucking robot! Not surprising from the tokusatsu stand point, but totally out of place if you're used to the boring American storyline.

Apparently this show set the standards for a lot of Sentai and Tokusatsu in the following years. It really is a staple and a great place to start if you're new to the frantic antics of Japanese Super Hero shows and wacky world of Toei.