Moustache Monday: demons and too much hair in all the wrong places

I watched Black Roses (1988) last week, which I may or may not get around to reviewing. But one thing's for sure, this guy's stache deserves to go in the 80's Hall of Moustache fame. It's funny how sometimes it's almost like the moustache is the real star of the film, and the guy wearing it is just an accessory. I think you see what I mean... 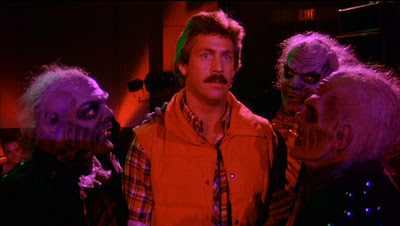 I know I've been a little neglectful lately, but there's just a lot going on right now with the move and the wedding so close. A part of what's been keeping me from reviewing is that I just have not had the time to do these epic picture heavy reviews, and I really like doing those. They're the most fun. I'd still like to document what I've been watching though and give my thoughts and musings as I normally do. So if you see more short entries for the next couple of weeks, don't be alarmed. I'm just trying not to spend so much time on the computer. Between the watching the movie, capturing the pictures, doing background research and writing the review it can take hours. Sometimes I have to save it and work on them intermittently through out the day (or days). I really love writing about movies, after I see one there's always so much I want to say. So I'm just going to adapt to my time restraints when necessary.

Expect at least one review later today!
Posted by Scumbalina at 12:03 PM