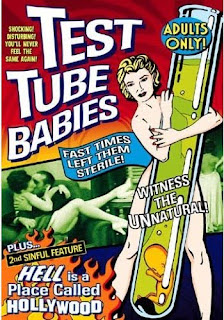 I wasn't quite sure what to expect from Test Tube Babies, but I had hoped for perhaps, test tubes, and babies as a result of that. To be honest I guess I expected a sci-fi movie of sorts, and for some reason I mentally associated the term "Test Tube Babies" with "Flipper Babies", only to be disappointed by this slow moving exploitation movie about a young couple whose marriage is on the rocks, so like most naive people, they can only presume that having a child will fix their fucked up relationship. After months of trying they decided to go to a doctor to see what's the hold up, they runs some tests on the wife and find that she is normal, her uterus is perfectly functional, but how could that be? It couldn't be the man who is sterile?? This is the attitude both the husband and wife share. I know that times were different then, and my having an IQ over 90 might have something to do with this, but even as a small child I understood the concept that although different, both women AND men could face a variety of biological complications. Despite the movie itself being quite silly, this idea seems the most absurd to me. The husband goes on to say that his sex life is normal, so how can he be sterile? Should these people really be breeding? Do we really need Mr. and Mrs. Test Tube Baby to spread their seed? Perhaps his being sterile is the universe's way of course correcting itself, but alas, the doctor introduces them to the then-new concept of artificial insemination, which the wife cannot even pronounce! The husband's only worry is that some sperm donor is going to get to have sex with his wife, ha! But aside from that, they're both cool with the idea and the movie ends with them happily being a family with their multiple "test tube babies" expressing endearment towards modern technology. The end. This movie was mind numbing. The couple was just so obnoxious and they're attitude was so nauseating that I think I started to take it a little too seriously, ha! In retrospect, it was fun hating them, and even more fun making fun of them in this review. 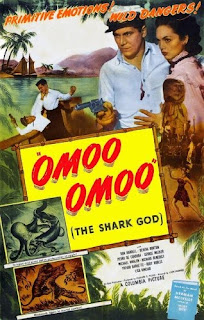 Omoo-Omoo the Shark God! I should have known that it sounded too good to be true. I should have known that a low budget movie from 1949 based on a Herman Melville story wouldn't live up to it's title. Indeed, there are no sharks and there are no Gods, just a big lopsided statue and some stock footage of two tigers fighting. I was hoping for something that would resemble a John Huston movie, oh how I set myself up for disappointment. The captain of a ship steals two rare black pearls, the eyes of the shark god statue, falls ill, hides them and leaves. Sets to come back with a ship full of assholes, including his daughter who falls under the same hypnosis of greed for the pearls. In fact, the highlight of this movie is her borderline insane ramblings about how the pearls belong to her. A pretty intense performance from an actress who never really did anything else.To be honest though, this was probably the most disappointing movie from this month's marathon, and the one of the one's I had the highest expectations from! I can tolerate and enjoy many different varieties of "bad", but "BORING" is one element of badness I cannot accept.


These two movies almost set me off of my propaganda movie appetite! Due to this, I decided to set the "cult classics" asside for a few days. I find it easy to burn out if I over do it on a genre, I dont want that to happen so let's explore some different grist in the mill for a few weeks...
Posted by Scumbalina at 4:09 PM