My Mom is Tor Johnson's Mom 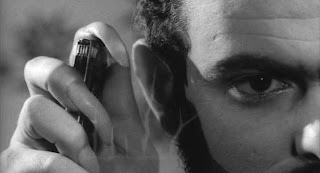 I was thinking about "This Night I will Possess Your Corpse" and what an awkward title that is. I mean, it doesn't exactly roll off the tongue. Not to say that it isn't BRILLIANT. Coffin Joe should have made a movie called "Sometime next week I'm thinking about possibly borrowing your nail clippers".

Ok, I think some mini-reviews are in order! 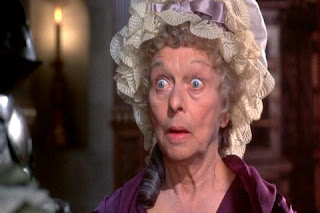 I've been making my rounds through the various untapped video findings I've collected from local thrifts, and finally decided to watch "And Now the Screaming Starts" an Amicus, period piece haunted house-type horror movie. To be honest, I generally don't care for that formula. Possibly why I put off watching it for so long, but in a moment of 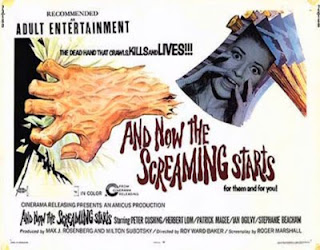 desperation, this unsung classic really surprised me with it's coolness.

First of all, it stars a bunch of great house names for Amicus and Hammer, such as (big surprise) Peter Cushing, Herbert Lom, Ian Ogilvy, Stephanie Beachman, but most importantly, Patrick Magee, who was also in Tales from the Crypt and Dementia 13, both movies I just happened to watch in the same week! He's haunting my movie marathons and I like it. the plot is ...well, kinda serious. A vengeful ghost haunts a "virgin bride" (pah!) by showing her it's severed "Thing"-hand, and desecrating her womb. Unfortunately they don't show that part, but there's a baby with a nub for a hand, and that's what really matters. 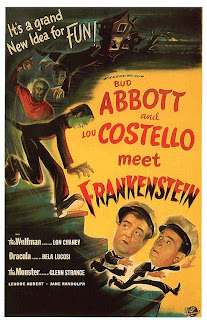 I finally got around to seeing this hilarious "romp" (I guess would be the word?). I have this thing for horror comedies, well, I'm obsessed with Arsenic and Old Lace and I'm always trying to find more movies like it. There really aren't many other movies like it. I've kind of self-titled this kind of horror comedy "Spooks Run Wild" after the East Side Kids movie, how better to sum up the jester-like antics of these classic monsters/characters?


Aside from the fact that Lou Costello whines a lot (I can only take so much) this is a really funny movie, especially the last couple of scenes when Dracula and Wolfman are duking it out, and the uncredited voice cameo of Vincent Price as the Invisible Man makes his ...uh... "appearance" (?) 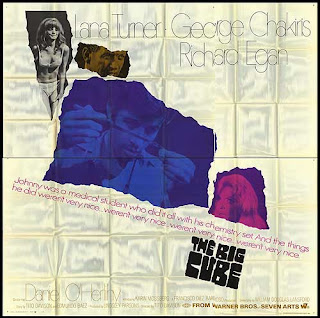 Straying further and further from the "horror" on this particular day, I ended up watching the Big Cube, which should have been called "The Big Turd" or even just "the Big Disappointment" would have been more fitting. I thought it would be a suspenseful psychedelic mystery-type of thing, ended up coming across more like a big budget propaganda movie. The DANGER of LSD, blah blah blah. Overly dramatic and attempted to come across sincere. I often read about these 60's psychedelic movies being "out-dated", such as one of my all time favorite cult movies, Otto Preminger's "Skidoo". I find it's unnecessary to even attempt and compare the 60's to the present. There are certainly movies that are timeless, but "psychedelic" movies aren't really made anymore. It was fresh in the 60's and I'm usually thrilled to see this moment in time captured in a way even my own psychedelic experiences couldn't approach. What I'm getting at is that as a general rule I love LSD themed movies! THIS MOVIE seems to be the exception! True, the effects were cool, colorful, sparkly, and fun... and so they should be! But the plot was very "meh", and kind of depressing. A spoiled rich girl's father remarries an aging actress (Lana Turner) who both seem to be very much in love. She of course acts bratty and rebels. Meets a young stud (not really though, George Chakiris, better known to me as Bernardo from West Side Story) who's an ex-med student, expelled for making LSD in the lab and selling it to students. After the rich father dies at sea trying to save Lana, Chakiris cooks up a scheme to drive Lana insane by slipping LSD in her pills and playing a tape with haunting suicidal/homicidal recordings on it; in her bedroom to drive her insane. Once she's out of the picture, he can marry the spoiled dumb ass (Karin Mossberg, who didn't do much else, a few Spanish movies) for her money. Her character is what I dislike about this movie the most. She acts completely mean and vindictive just because some guy she hardly knows convinces her that she needs her father's money NOW rather than waiting until she's 25 like the will states. I just can't sympathize with a character like that, yet it's played as if she's a victim as well. The ending doesn't really make any sense either, Chakiris just has a bad trip and Lana and Karin have themselves some step-bonding. Thee End. Whatever.

At this point I realized that I had inadvertently broken my horror-only vow for this month, so I said, "What the hell, time for some Van Damme"... 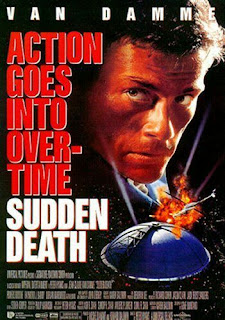 I was at my mom's house flipping through the channels. This is the only time I get to enjoy, or not enjoy the luxuries of cable. It's hit or miss with those over priced movie channels. For instance, before this gem came on you would have caught me watching Dutch starring Ed O'neal and Ethan Embry when he was 12 and still had a promising acting career, but I digress...

In my universe good and bad are inexplicably linked. For this reason, this may be the greatest movie ever made. The greatest bad movie that is. It almost magically comes full circle from bad to hilarious to "whoever wrote this is a comic GENIUS!". And let's face it, Van Damme has made some stinkers. Wonderfully tacky with his signature side-split and mullet. 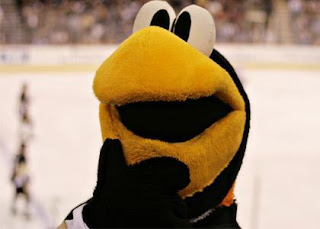 For this to have surpassed Double Impact is truly a remarkable achievement.
Do you know what the best part of this movie is? No, not the one liners, not the ABSURD typical 90's action movie plot, not even the amazing fight sequence in the kitchen with a Penguin Mascot (though that one was DAMN close, VAN DAMME CLOSE [sorry]).

The highlight of this movie was of course Mr. Powers Boothe as my new favorite super villain...
At the end you get to see this handsome asshole wearing a really awkward blonde wig and 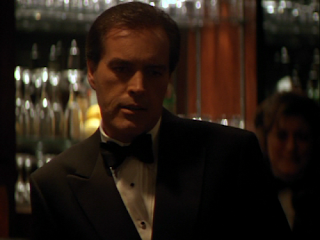 moustache, and his death (not giving much away, this is a Van Damme movie so obviously the bad guy's gotta die) is the most sensational retarded Hollywood crap I've ever seen! I couldn't even believe it was happening.
I'd like to take this opportunity to express my love for this man. After Emerald Forrest, I was hooked. Hopelessly addicted to yet another brilliant underrated actor. And what a name, POWERS BOOTHE, could you think of a more power-ful name?