I should teach a class called "Slacker 101". I am the poster child for procrastination. Why do I say this? The first week of my absolute favorite month of the year has come and gone and here I am, at a loss for words. My Halloween spirit has suffered this year, it suffered a bit last year two, which worries me. I feel like my inner child deeply needs some attention. So naturally I've been digesting ample helpings of horror, sci-fi, thrillers, mysteries, etc. Yet, until today I've let the intimidation if this lovely season overcome me.

So let's talk this thing out. 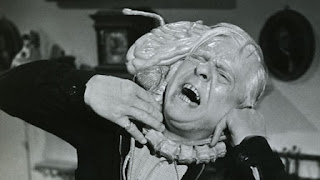 Thankfully with the help of Peter Lorre and Arthur Crabtree I've been able to overcome this defeat.


I'd like to take this opportunity to say that Tony Todd sucks. He's a bad actor and an asshole to boot. I met him once and he wasn't very nice. It took me years to finally get around to watching the shitty Night of the Living Dead remake. Now that that's out of the way, it was quite refreshing to see something I would say is in good taste.... 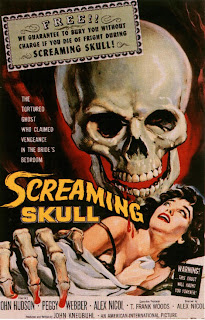 this movie should have been called "the Fainting Woman" considering that every time "the Screaming Skull" makes an appearances, the gal practically collapses on top of it. I'm more fascinated with this than any other aspect of the movie. The whole fainting thing. I love it. In fact, I can't get enough of it. It's just such a cop out? How mentally/physically frail do you have to be to just blackout? I mean, sure, if human remains appeared in my living room I'd have a few questions, and if I were afraid my instinct would be to get away. FAR away. Aren't you sort of at the mercy of whatever , when you faint? I couldn't stop thinking about this after I watched the movie, I talked to a friend about it and she suggested that there's some sort of unexplainable fear of the supernatural attached to the idea of skeletons. A sort of unrest that reminds you of your own mortality. I guess when you think about it that way, I wouldn't feel particularly comfortable around a skeleton, outside of say; a doctor's office. However, I can't break this idea I formed as child that put in one of these horror movie scenarios where I would be confronted with a ghastly skeleton that I couldn't just kick it in the shin and run away. I mean, what's it going to do? Rattle it's bones at ya? Chatter it's teeth a bit? I would think that skeletons sort of the laughing stock of the supernatural world. I digress...
It's good to be back!
Posted by Scumbalina at 3:32 PM