I can't believe it's already December! More so, I can't believe I let all of October, and then November pass without writing about my Halloween marathon. That which is so dear to me. The one thing that's been a constant on this blog since I started it in 2009. Something hasn't felt quite right these past few months as I've been swamped with work. I always feel a little empty when I can't make time for Atomic Caravan but missing all of October sent me to new depths. So even though December is here and I should be working on my Crappy Christmas marathon and drafting my 'Top 50 First Time Views of 2015' list, I feel I would be getting ahead of myself if I didn't take a moment to reflect on the highlights of October's annual marathon. 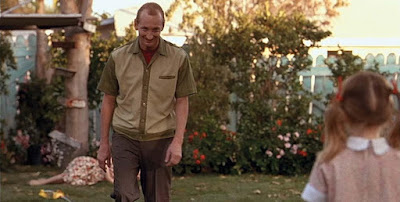 I always try to focus on a director or revisit a series throughout the month of October. Last year it was the Ju-on films, this year my attention was on the Nightmare on Elm Street series. These aren't really films I've felt much of a need to discuss, not because they aren't great because I would just be echoing an already well covered area. Wes Craven's New Nightmare is my favorite, followed by the original; 2-5 are fairly equal in my opinion. I know a lot of people aren't crazy about Dream Child, but I find Dream Master to be the lesser of the series, but really who's counting? They're all Freddy movies and that makes for good times. The one unpredictable moment in the marathon was Freddy's Dead:The Final Nightmare, because somehow in my 30 years of existence I'd never watched it. Shocking, I know. I missed it somehow and by the time I realized, I decided to hold off until I was re-watching the rest all at once. What's interesting about it, and about the fact that it somehow evaded me, is how strikingly different it is from the rest of the series. The other sequels seem united by a collective theme, this one is peculiar from the onset. The tone has changed and the characters are totally unfamiliar. At first, I was off-put by how far it strayed from the formula but after a while I embraced it. There is something very "final" and empty about it. It's the 'Silent Night, Deadly Night III' of the series - bizarre and slightly Lynch-ian. I believe director Rachel Talalay even stated that Twin Peaks had influenced her in the making of Freddy's Dead. I appreciate the risks the film took, and I don't begrudge it's failure. It added interesting if not unneeded dimension to Freddy Kreuger's mythos, and really....would the BEST film in the series have happened after if Wes Craven hadn't stepped in to say enough is enough. 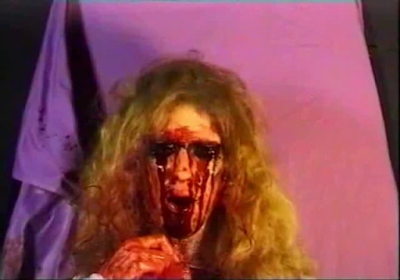 This one was an, um, "experience". It's the goriest movie I've endured in a while. I watched it in French with no english subtitles but it didn't matter much. 95% of the dialog is guttural screaming and Satanic incantations. Senseless, never-ending, ritual-like forest murder from the get go. On paper it's not something that would normally be in my wheelhouse, but the tenacity of Murderdrone pioneer Antoine Pellissier makes is the horror equivalent to watching one of those ambient fireplace screen savers. The violence exceeds a level of normalcy where it almost becomes zen. Red Jammy Jams and purple polyester. Druid-eque Satanists, Satan-Heads, Vampiric Crypt An Daemons, Pastoral Zombies, Goth Girls with Perms. The Works.

I posted lots of pics on Tender Moments. 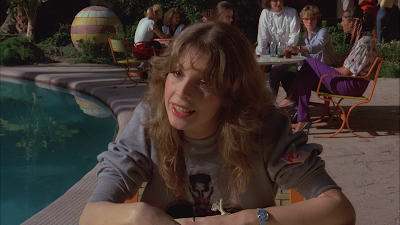 Jess Franco is probably my favorite director that I have such hot and cold feelings for. There's are handfuls of films I dislike or have no feelings toward whatsoever, but there are also canonical masterpieces that I'm thankful exist. You never really know which kind of Franco film you're in for, though after a little experience you start to get a sense of his "eras". My knowledge going into this one was that it was of his German period and that it was his attempt to jump on the slasher band wagon. In my mind this didn't seem like such a far reach, but he is clearly out of his element and it is awesome. As far as I've seen, this is the apex of his career. It seems oddly more naive than his previous work. Usually when I watch his films I feel like he knows something I don't, but in is case he brought himself down to our human level and it is just beaming with weird. He may have gone through the motions but cannot be limited to the confines of a formula. While it indeed is a slasher, there's something more interesting happening just below the surface. It's almost feels as if the players are aliens pretending to be human. There has never been a more beautiful marriage of colors. Pinks, golds and just the right shade of blue through a soft lens. Shadows that don't make sense. This film truly took me to an alternate reality, and has the most amazing wardrobe I've ever seen in my life. It's the kind of film I instantly want to watch again to make sure I didn't miss a single frame. And there's incest. In December I finally caught "Blue Rita" which had the same Alien Transmission vibe, and the most hilarious youtube worthy fight scene I've ever seen. I feel that I've finally tapped into MY Franco Era. 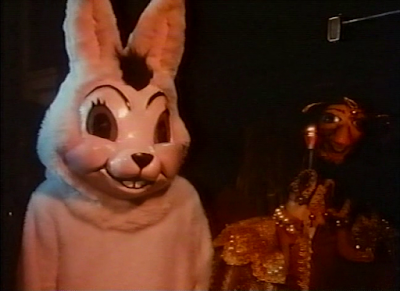 I wasn't really sure what I was in for with Skullduggery, the census seems to be of a general confusion. It is indeed a "what the hell did I just watch" kind of experience. It's drawing from so many different places, the end result can barely contain the sum of it's parts. Literally overflowing with the elements of five movies, Skullduggery crams them all into one little bizarre mish-mosh. Let's break it down.

1. Role Playing Games. A Dungeons and Dragons inspired slasher? One of the least successful sub-genres of horror (Throw some titles at me if I'm forgetting but Mazes and Monsters is the only to come to mind). What makes it work so well in this movie is that, I sincerely don't understand these games and especially something as vast as Dungeons and Dragons. It's as complex as finding any coherence in this movie. So they're united both in theme and in being unattainable.

3. Dungeon Synth. This discovery is relatively new to me. While the film has been on my watchlist for a while, this inspirational list on Letterboxd by Gregory Joseph propelled to high priority. Dungeon Synth is a musical genre that sounds exactly like it's description. Evocative, atmospheric, visceral, setting the soundscape for a film like Skullduggery with a poetic coldness.

And for your viewing pleasure, I posted pics on Tender Moments.

Let's face it, Aliens are cool. This movie starts out with a totally sincere and terrifying aura. I'll never un-see the infamous Alien peaking from behind the armoire. Then after the first encounter, it enters pure schizophrenia. In an interview director Philippe Mora said that Walken was the kind of actor that works best with freedom, so he gave him that freedom. I'm sure a lot of people think this was to the film's detriment. His approach certainly does turn would be terrifying moments into something that's more like a joke, but a really hilarious joke you want him to expand upon. I'm sure Author Whitley Strieber was appalled to see his traumatic life changing experience basically mocked by deez nuts. My favorite moment, THEE best moment is when Walken is about to get probed and he looks at the little dude holding the phallus and says "...Can we talk this over?"...and if that's not enough, as the alien draws the dong shaped device close to his face he says "You look like you're about to sing White Christmas." My friends, THIS is a movie. You're removed from the horror elements but instead given this beautiful character study on the epileptic personality of Christopher Walken. I dare say I never truly appreciated him until this moment. He ad-libbed his way into my heart. In the end there's a New Age resolve that totally delights my balls. A few years ago I watched the incredible "The Suns of Easter Island" and my afterthought was that I desperately need more New Age Metaphysical Alien movies in my life, Communion is the only one that's come close since. Strange Science with an ample dose of anal probing.

That's it kiddos, sorry for the belatedness as per usual. Trying to mend fences 'round these parts. I have another movie lined up that I know for sure will be my next full review, I just hope I can deliver before the New Year! Either way I PROMISE to post my Holiday Horrible-thon in a timely manner.