I'm still lagging a little trying to get back in the swing of writing again. Endless Fall's been kickin' so I thought I'd post my top 10 for January. Nothing too detailed or special but just a quick summary of my favey movies I saw for the first time last month. I've been catching up on odds and ends I should have seen way before now. You'll notice a lot of classics on this list. There will probably be more next month too.

10. Village of the Giants

It wouldn't be my list without the inclusion of something ridiculous. This one really entertained me early in the month with it's silly plot and campy effects. In the tradition of Bert I. Gordon films, he loves to make things big and small. There are many sequences that are captivating in some strange hypnotic kind of way. Especially due to Jack Nitzsche's amazing score which Tarantino jacked for Death Proof. My favorite scene though is seeing two giant ducks dancing wildly to the Beau Brummels at some 60's mod nightclub. Amazingness.


9. The Creature from the Black Lagoon

I know what you're thinking. How the heck did I go so long without seeing this? Especially considering is was film in the part of Florida I grew up. I got a late start on Universal. I saw Dracula and Frankenstein when I was a kid and neither really spoke to me so I just never made any effort to see any others. It wasn't until just a few years ago when I finally saw Man Made Monster and the Invisible Man that I decided to give myself another chance to enjoy these wonderful films. Creature has a nice otherworldly feeling you don't get from the other Universal monster movies. Although we're looking at a Florida swamp you get the impression this is completely uncharted territory and that our violent merman is the missing link. It feels mysterious, he's so cool looking, what's not to love? I'd also like to add that I think all of those asshole scientists totally deserved to have their asses handed to them for going into this magical place untouched by man and putting out their fucking cigarettes out in the lagoon. I didn't expect much from this one. It was a late night pick, all I really knew was that Boris Karloff was in it and it was based on a Lovecraft story. I've been trying to make my way through the massive list of films inspired by Lovecraft, I didn't expect it to be my favorite monster movie of the whole month. It was vivid and mysterious. There are freaks, meteors, mutants and shrouded killers that roam the castle grounds. There's a sense of urgency in the air and that impending doom grows stronger as the movie progresses. A great little horror flick forgotten in a sea of 60's b-movies. 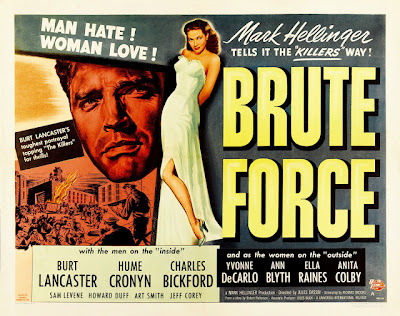 It's no secret that Jules Dassin is just fucking amazing. Seriously. So I finally got around to seeing Brute Force. One Dassin's favorite things is to show heists and escapes gone awry. Being set in a prison Brute Force was obviously incredibly influential. My first thought was that the evil warden played by Hume Cronyn reminded me of "Percy Wetmore" from the Green Mile, played by the exceedingly creepy Doug Hutchinson. Brute Force is a little slow to start but by the end of the movie I was completely enraptured by the chaos and anarchy engulfing the prison. The movie also solidified my lady-boner for Burt Lancaster FOREVER!

The Decameron was really refreshing compared to anything I could have imagined. I've only seen Salo and it's been years so I was a little nervous jumping back into Pasolini. This turned out to be mostly comical, and also an anthology which made it surprisingly light and easy to digest. Some sketches are charming, some romantic, most have a clever sense of humor and all of them are at least mildly if not overtly risque. Tales about shit covered grave robbers, the severed head of a lover in a potted plant, a young man pretending to be deaf and dumb so he can seduce a convent of nuns, and intermittently through the whole movie an artist played by Pasolini creating a masterpiece on a church wall obviously mirroring the film itself. It's a really nice piece of work and I'm glad to have finally been reacquainted with Pasolini! 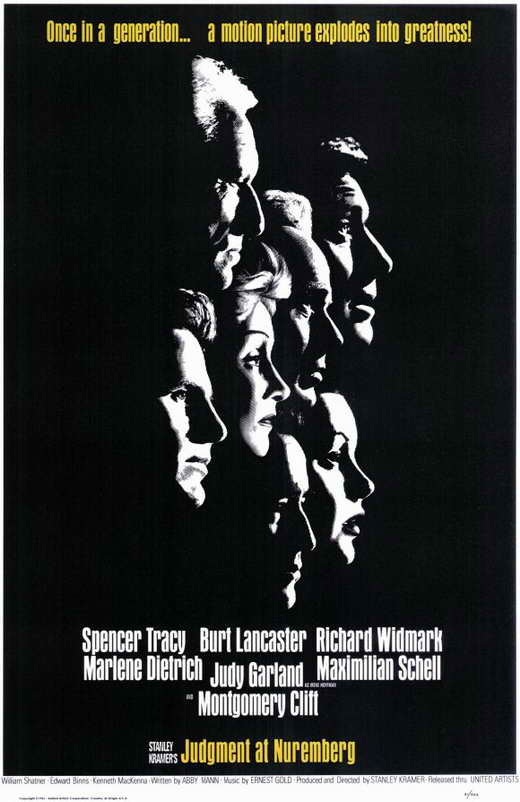 I love me some Stanley Kramer. When it comes to Kramer the bigger his all star casts, the more ambitious the film. This, apparent from the title, tackles two of his favorite genres. Courtroom drama genre and race relations, specifically anti-Semitism. As expected the cast is amazing beyond belief. Spencer Tracy as the Judge, Richard Widmark as the prosecuting attorney, Burt Lancaster as a Nazi Judge with a guilty conscience, a young Maximilian Schell who took home the Academy Award for best actor as the German defense attorney. My personal favorite was Montgomery Clift's extremely unnerving performance as the mentally unhinged German who persecution made him the subject of cruel Nazi procedure. The film is long and heavy handed but raises many questions of ethic, not just for the horrors of Hitler's regime but also in the treatment of Germans post war.

I was way late in seeing this. Mostly because I had no idea what it was. I had read about Joyce McKinney several years ago when she had her dog cloned. I became obsessed with the article and even cut it out and pasted it in my sketch book. I was also fascinated because the article mentioned filmmaker Trent Harris (Beaver Trilogy, Rubin and Ed). I remembered the article saying he had made a documentary on her,but I was never able to find any information on it and that I've seen Tabloid I'm thinking maybe he was just planning too and somehow since then the project ended up going to Errol Morris. At any rate, this story tells itself. Once it starts to unfold it's like and jumbling tower of cluster fuckery exploding in your face and making your brain implode. The tackiness knows no boundaries!

Another Kramer produced race relations film from the 60's. Although you start to get a little tired of seeing Poitier play this role over and over again, this one was especially good, maybe the best I've seen. He plays a prison psychologist who's been given the case of a young Nazi sympathizer played by the incredible Bobby Darin. Of course Darin hates him for being black but eventually opens up to him because he's so plagued with trouble he cant sleep. He goes into his childhood, and artfully staged montage with Kramer's signature all over. Hideously abused by his father, over loved by his weak willed mother, it's pretty clear that this guy has some serious hang ups. He has violent tendencies and gets mixed up with the Bund in the 40's. Despite Poitier's endless patience Bobby Darin's character continues to make disrespectful, bigoted comments to him. Over course it all boils over into an explosive confrontation. Really exciting movie that had been completely engrossed the whole time. Sidney Poitier may play this character but it's just because he does it so well. He's strong, handsome and intimidating to this meek little asshole played by the equally as impressive Bobby Darin.

A friend had been urging me to see this for a while. All I really knew about it was that it was directed by Henri-Georges Clouzot and it had an exploding truck on the poster. YEAH, I'm sold. So in order to amend a terrible oil explosion in South America, the company hires transient men desperate for money to drive truckloads of liquid nitrogen for days across rocky dangerous terrain. The result is a tense pressure cooker of events where these men have to work together to avoid catastrophe. A genius action, with very little action. More of psychological or even existential action film.

I was so sure Wages of Fear was going to make number one this month, then the last movie of the month snuck in there. Suddenly Last Summer is haunting and hazy. You really don't know who to believe through out the whole movie then in grand tradition of Tennessee Williams he fucks your world up right at the end. Elizabeth Taylor gives arguably the best performance of her career and Katherine Hepburn is about as close to a villain as you'll likely see her. The Bat-shit-crazy-ness that unfolds is only best explained through experience and I have a hard time expressing my love for a movie that REALLY moves me so I'll just leave it at that