I've really let this blog go to slacksville in the past month or so. I have a pretty good excuse this time though! My mom flew in from Florida for vacation. I spent a good week domesticating this place before her arrival and obviously didn't get around to watching many movies while she was here. She left over two weeks ago but since I had taken several days off too, I experienced a little bit of post vacation shock. Have you ever had  that? It's the like the first week of school, you can't really find your groove because you got used to not having any responsibilities. Anyway, I've been trying to take it easy and in turn have watched many movies, several of which I'm going to touch upon bulk review style.

I'll try to do this chronologically. While my Mom was in town she wanted to hit up as many thrift stores and yard sales as we could so she could hunt for treasures to sell in her vintage Etsy store. This worked out well for me when we hit the jackpot at an Echo Park yard sale in the VHS department. Stacks of b-movies spanning from the 60's-80's! After Mom's departure I partook in some much overdue Hookersploitation with the 1984 film Angel. 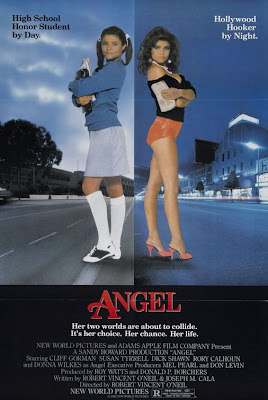 I'd been wanting to see this for years. I know it's available on DVD now, but it's so apart of my forbidden video memories that such an upgrade seems unorthodox. I'm used to seeing it staring back at me while browsing for video nasties when I was a kid. I was scandalized and hypnotized by the cover and could only imagine the sleaziness to behold. So finally, I sit down to watch it, and it's NOTHING like I expected. It's not sleazy, it's kind of pathetic. She doesn't really want to be a hooker, she's more of a victim of circumstances. It plays out a lot like an afterschool special, thankfully, there is a serial killer. You know the type, He butchers street walkers for kicks. He helps move this emotionally wrought story along, giving it more of a punch. Despite my love for a good movie killer, the best performance in the film is BY FAR Dick Shawn who plays Angel's drag queen friend and fellow floozy. Dick Shawn has a way of stealing the show in all of the movies he's made an appearance in, Angel is no different. His best scenes are those shared with Angel's "Jew-Dyke" land lady, played by the fantastic Susan Tyrell! Just as bat shit crazy as you'd expect from Queen Doris. All in all, Angel was a little more heavy handed than I would have liked. They make it seem like whoring your body out is a bad thing. Pfft. Not in a low budget 80's movie, my friends.

A little later that week I watched the Stanley Kramer classic, the Defiant Ones, starring Sidney Poitier and Tony Curtis as members of a chain gang. The paddy wagon they're being transported on wrecks creating a perfect oportunity to make a run for it. Completely at odds and bound by chains, they're constantly at eachother's throats. This is the late 50's (and a Poitier movie no less) so you can be sure there's lots of racial tension. In fact, "tension" is probably an understatement. Despite social taboos, they're both criminals and have to work together if they have any chance at freedom. 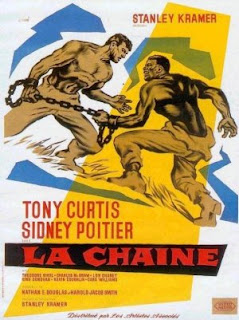 A wonderful premise for the times although the end confused me a little bit. SPOILER ALERT... Because of injuries Tony Curtis sustains he is unable to hop the train they're supposed to escape by, so what does Poitier do? Jumps off to stay with his friend. I understand that by this point in the film they've accepted one another and have even made a few sacrifices to keep each other alive but this seemed a little absurd to me. I loved the movie so much but the end, however so charming, left me scratching my head a little. It didn't quite add up. So I do a little research to discover that apparently there's this WHOLE homosexual sub-text that I didn't even pick up on. During that time of course gay relationships were terribley watered down in Hollywood films, so it's not unreasonable that this could be overlooked. It makes complete sense in retrospect. There's a lot of cuddling and a general disinterest in women. Sure, Poitier had a wife, but really what does that matter? Especially back then when most homosexuals found wives despite their sexual preference due to social obligations. Curtis, who had quite the reputation in real life, comes close to using an older marm-ish woman as an escape plan but eventually realizes he's better off with Poitier. The scene where he's rinsing his buff body in front of her is almost taunting. Both men are at their sexiest in the Defiant Ones and when they're at odds you can almost feel the flames through the screen. This is all muddled down with obvious racism, which was much more of a commercialized form of biggotry. Interacial homosexuality? Un-fucking-heard of. With lines like "You're married to me alright, and here's the ring!" *rattles chain*, there's an undeniable message. I don't mean to say this is all physical, but now that I've given this some serious thought there's definitely a strong emotional bond between them by the end of the movie that inevitably dictates their fate as a team. 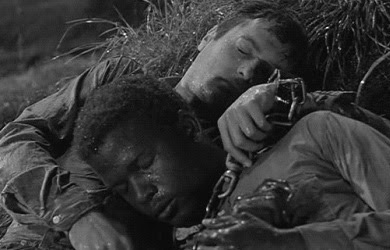 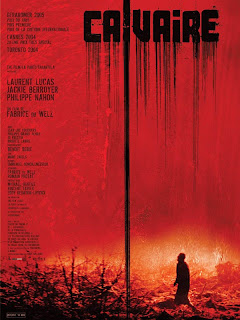 It's dismal, ugly and not in the least bit scary. The borderline illusive narrative that lingers in this film dissipates after it's realized that everyone is just fuckin' insane. Lots of rapey-ness too. Ohhh, how they rape. Butt raping, pig raping, suggestive cow and dog raping. The gratuitous sex crimes wore on me, especially the manner in which it's presented. Calling the male victim a bitch, beating him bloody, shaving his head, crucifying him, et-fucking-cetera. It's all about humility and shock. I've seen these kinds of images before in film and it got me thinking about rape as a plot device in horror movies. When I was younger I had more of a unphasable curiosity about such visions of suffering. I could definitely attest to my skin being much thicker in my late teens. Now when see these visuals I feel a combination of boredom and revulsion. I need more than just grotesque imagery to appease my horror fandom. I do enjoy storytelling, character development and a little bit of finesse. This isn't about budget, lord knows I've fallen in love with many 'a zero budget movie. This is about content. Calvaire is completely insubstantial and is a good representation of what I don't like about most modern horror. To my personal taste suspense is what controls the terror I might feel watching a horror movie. This trendy international lackluster snuff fad is hopefully a passing one. Perhaps it satisfies other cinepheliacs blood lust but as for me I'll stick to my regularly scheduled programming of films forgotten by time.

After Calvaire I needed something drastically uplifting to wash the taste of dried blood and asshole out of my mouth, so I went with the most redorkulous movie in reaching distance, Supervan! It's a title I've come across many times in my b-movie wanderings but when I saw the cover at Amoeba a few weeks ago it hit me in a different way. I took time to study the creation itself. It's beautiful physique. It may just be the most amazing  vehicle I've ever seen. I decided I was in love with it and that I had to leave my husband and cats and marry it. Yes, that's the power of Supervan. So I purchased it on the spot and as fate would have it a few days later a shitty torture porn movie would put me in a bad mood and my soul mate, Supervan, would be waiting on the shelf to comfort me in my time of need. 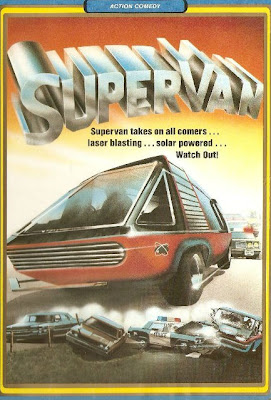 The story follows a guy who's going to enter his souped up van in a contest called "the Van Freakout of 1976", which is basically a love-in with  cool vans and a brief cameo by Charles Bukowski as a wet t-shirt contest judge. While saving a young woman from being raped by bikers, his van gets trashed in a junkyard. Thankfully he has a scientist/inventor friend who's created the Supervan! It "takes on all comers...laser blasting...solar powered...WATCH OUT!". The plot's a little runny, I found myself not really interested in the characters. It's obviously rip-off of Smokey and the Bandit only with vans and no Jerry Reed (which I tend to think helps most movies). Nothing else really matters in this movie except the Supervan. That's the real star here. I'm fascinated with the whole Van culture of the 70's. I've never been into cars at all and (normal) vans always seemed kind of lame. With movies like this, and of course The Van, not to mention a random plethora of 70's drive-in classics that feature tricked out vans I'm starting to see the appeal. At the end of the movie we're treated to a showcase of all the cool airbushed and muraled artwork on the vans from the contest, but you can be sure nothing can top the chic sci-fi wonder-mobile that is Supervan. 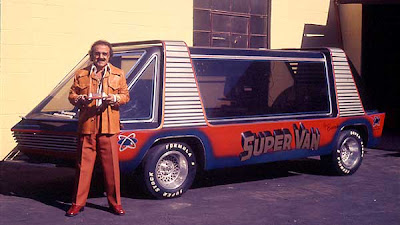 
I know what you're thinking "but Scumbalina, why haven't you been watching any Gary Busey movies?". Never you worry my dears, I saved the best for last. The 1988 action packed classssssssssic Bulletproof. 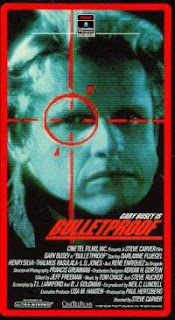 He may be Bulletproof, but he's not love proof. Busey plays Frank McBain, a tough cop who earned his nickname from having taken 50-something shots in his career. He even keeps the bullets as souvenirs. He's given a top secret assignment to rescue a Supertank (litterally, the tank version of Supervan, this cinematic synchronicity is nothing short of kismet). It's SUPER spectacular, indestructible, impenetrable and infinitely unfuckwithable. An added bonus is that his militant GI Jane ex-girlfriend has been abducted by the terrorist bad dudes as well. Henry Silva leads this incendiary mission of world domination via Supertank high jackery. He plays a stereotypical bad-guy Muslim who unrelentingly rapes insubordinant women in the name of Allah. We get to see Gary Busey coming out ahead in all kinds of situations despite his general ineptitude. In all of his radiant awkwardness we get to see him crotch dive onto Danny Trejo from a rafter and also spinning down a hill on what appears to be an oversized cable roller. If you're not convinced that this is one of the 80's best accomplishments then you just need to get your priorities straight, Butthorn. 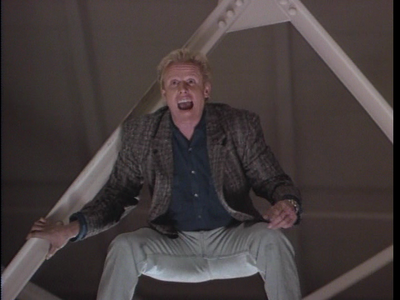 On that note, I'm spent. That was a mouth, er...handful, eh, butthorn-ful. I'm going to go dream of Supervan and Busey-isms. Stay cool.
Posted by Scumbalina at 9:58 PM